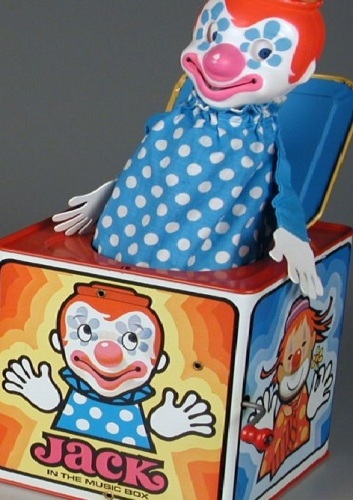 - JACK IN THE BOX MUSIC,

The tune appears to have begun as dance music, to which words were later added. A music sheet acquired by the British Library in 1853 describes a dance, "Pop! Goes the Weasel", as "An Old English Dance, as performed at Her Majesty's & The Nobilities Balls, with the Original Music". It had a tune very similar to that used today but only the words "Pop! Goes the Weasel". The dance became extremely popular, and featured on stage as well as in dance-halls. By September of the same year the title was being used as a scornful riposte and soon words were added to an already well-known tune. The song is mentioned in November, 1855 in a Church of England pamphlet where it is described as a universally popular song played in the streets on barrel organs, but with "senseless lyrics": the use of alternative, more wholesome words is suggested. The following verse had been written by 1856 when it was quoted in a performance at the Theatre Royal:

Up and down the City Road

In and out the Eagle

That's the way the money goes

Note: In cloth making, the machine that wound the yarn was called the weasel. Every 1,000 yards, the machine made a popping sound, thus "Pop! goes the weasel." Another folk origin is the pop! of the hunter's trap. Additional verses related to both traditions are:

My mother taught me how to sew,

And how to thread the needle,

Every time my finger slips,

You may try to sew and sew,

And never make something regal,

So roll it up and let it go,

I went a-hunting in the woods,

The dog and I were caught with the goods,

I said I didn't hunt or sport,

The warden looked at my beagle,

He said to tell it to the court,

JACK IN THE BOX MUSIC BOX